So this was something fairly inte 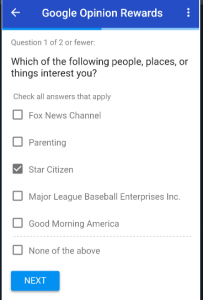 resting I came across. For some background info, Google Opinion Rewards is an Android app that gives people Google Play credit to answer surveys. As part of the process, they reserve the right to stop sending surveys if they “believe [the user] is lying” on the survey results. Star Citizen is a crowdfunded video game. The screenshot below illustrates very obviously such a “lying check” survey, where the algorithms have quite obviously failed at understanding the topic. The user, posting in the Star Citizen reddit, announces that Google is interested in Star Citizen because it is asking him about it. A quick scan of his reddit history doesn’t show any interest in any of the other topics.

Salient points:
1) No matter how much implicit data you have, explicit data is better. To the degree that Google is willing to pay for it.
2) Google nevertheless has areas where they are so certain of their data that they believe they can eliminate both false positives and false negatives to figure out if the user is lying to them.